3.1. Definition and other scary stuff

Pollution is the introduction of contaminants into the natural environment that cause adverse change. Pollution can take the form of chemical substances or energy, such as noise, heat or light. Or in plain words, pollution is too much of something in the air that is bad for you. And in our case PM 1, 2.5 are by far most dangerous enemies. SO we want to know when will they attack.

PM stands for particulate matter (also called particle pollution): the term for a mixture of solid particles and liquid droplets found in the air. Once inhaled, these particles can affect the heart and lungs and cause serious health effects.

The smaller particles, more dangers for your health - so PM1 is most harmful
Today, the WHO and the EU are monitoring PM2.5 and PM10 and reporting on the negative health effects of these particles and their ability to penetrate our lungs and cause respiratory and cardiovascular morbidity and disease. But to provide a truly healthy and productive indoor air environment in areas with bad air pollution, ventilation systems need filters that are also capable of removing PM1 particles – the smallest fraction and the most harmful.
Our lungs are prey to PM1. When inhaled, PM1 particles travel to the deepest area of the lungs, where a significant part of them passes through the cell membranes of the alveoli (the millions of tiny sacs in our lungs where O2 and CO2 are exchanged), enter the bloodstream, damage the inner walls of arteries, penetrate tissue in the cardiovascular system and potentially spread to organs.
At worst, PM1 can contribute to deadly diseases like heart attacks, lung cancer, dementia, emphysema, edema, and other serious diseases, leading to premature death.

The primary source of air pollution in BiH comes from burning wood and coal, which pollutes much more than natural gas. Car, smokers, and other sources contribute but not as much as burning. As one of the few developing countries in Europe, BiH must rely on coal for economic reasons. While the majority of Europe has switched to natural gas, BiH still derives 64% of its energy from coal. In BiH, coal consumption per capita is the 11th highest in the world. 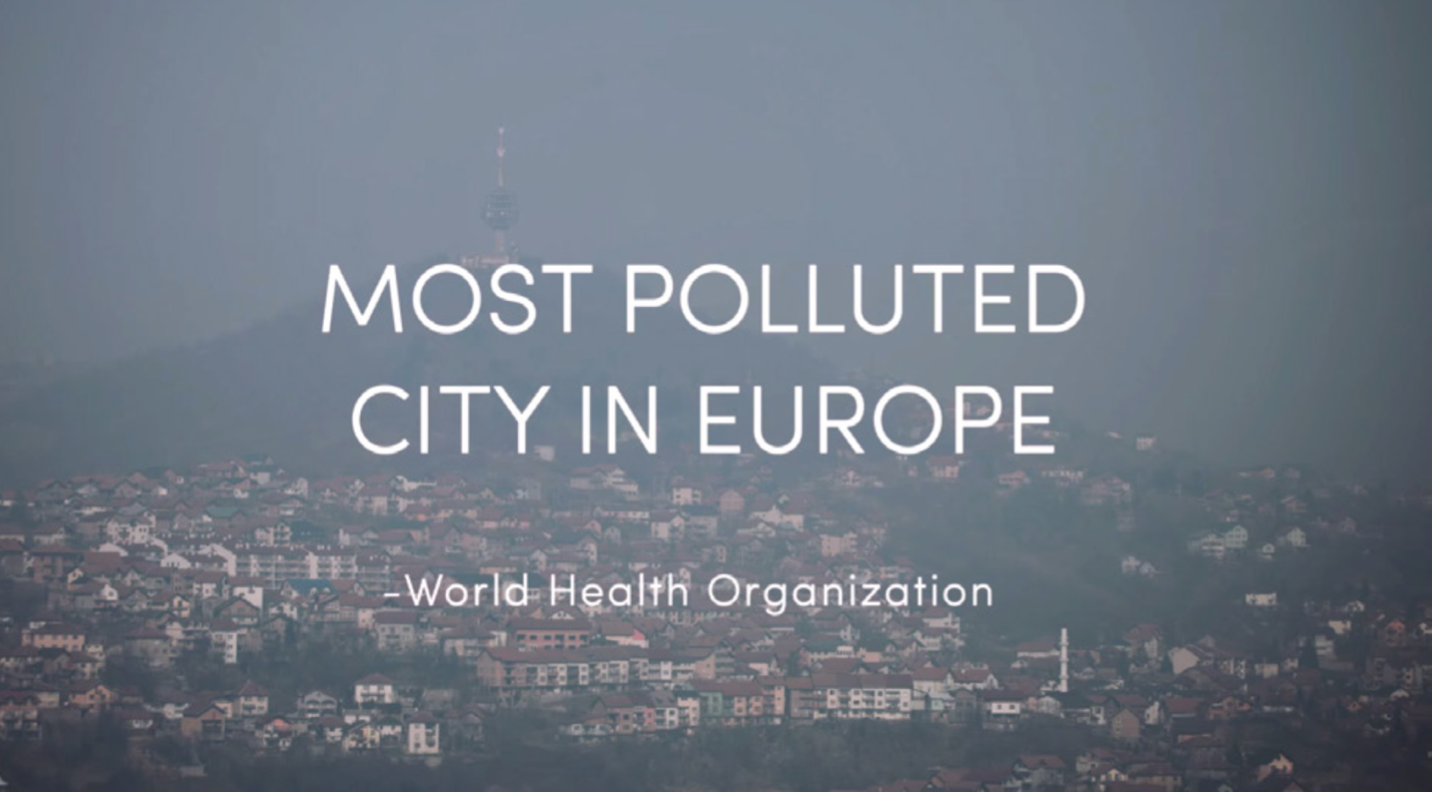 In Sarajevo, the problem greatly magnifies during the winter, when low-income citizens burn wood and coal for home-heating in old inefficient stoves. This, combined with Sarajevo’s susceptibility to temperature inversions which with high buildings inhibit air circulation (no wind), results in hazardous levels of pollution during the winter season, where pollutants increase up to 1200% during this period. In order to tackle this problem, we need to do something very innovative and effective.

As we mentioned, fine particulates are the deadliest form of air pollution due to their ability to penetrate deep into the lungs and bloodstream unfiltered, causing cancerous DNA mutations, heart attacks, lung cancers, and premature death. Sometimes PM is visible in the form of smog (if the fog is present), but is often invisible, with the smallest particles being the most hazardous floating around us in air.

While climate change has placed the world’s focus on reducing CO2 emissions, such gases are not harmful to humans in small amounts. However, there is no safe level of PM (particulate matter) — and with every increase of 10 μg/m3 in say PM10 increasing lung cancer incidents by 22%, with the smaller PM2.5 particles even deadlier at 36%, follow that math and you will quickly add 2900%+ increased risk of lung cancer on a bad days of pollution.

With PM10 levels in Sarajevo among the highest in Europe, reaching up to 400+ μg/m3 (8 times the daily legal limit in EU), so it is important for you and those you love to stay informed of the dangers of particulate matter and the hazardous levels present in the air in Sarajevo. From our measuring over the last 5 years we know that PM2.5 and PM1 are at similar or worst scary levels like PM10, making the situation even more critical.

This is an ugly subject - but it is better for all of us to know what we are dealing with.